One of my favorite Windows 8 features is the addition of Hyper-V. I’ve been using Hyper-V off and on as a VMWare replacement since attending the Microsoft Certified Master training in 2009. MCM certification includes a hands on lab test that required me to get intimately familiar with the software. I’d used VMWare again after finishing the Hands on Lab in 2010, but thought I’d give Hyper-V another chance when I installed Windows 8 RTM on my main work laptop.

Mostly, I like it. Awhile ago, it seemed a little slow. I foudn that disabling the power saving features on my Dell Precisions’s BIOS settings made the VMs run faster. After that change, my main nag was networking settings.

At Rackspace, Virtual Machines are fairly pervasive. Besides SharePoint Developers like me running VMs from Windows, there are quite a few people running VMWare on MacOS for various things. However, Hyper-V on Windows 8 is pretty new and I ran into some networking issues. #1, I couldn’t get my Vms internet access while physically connected to the internal network.

For the last few months, I’ve been using the limited access WiFi network to get my VMs internet access. Without internet access, I couldn’t get code from source control or check it in. Very limiting for a developer. However, if I wasn’t plugged into the internal network, I couldn’t get access to lots of things. For example, I couldn’t see the lunch schedule or even log days off!

Today, I finally found the solution. The feature I was missing from VMWare was it’s NAT Configuration. Using that I was able to connect through my laptop’s network to the internal network. In Hyper-V, I couldn’t find anything similar until now.

The solution in my case was found in a hint from a fellow SharePointer from the Windy City, Nik Patel. I saw Nik’s comment in a TechNet forum saying how hard it was to find the Advanced Features of the Network Adapter in Windows 8. I had found that on a search for “enable spoofing of mac addresses.” I saw that feature while reading this SmoothWall Express post showing the setting in a different version of Hyper-V. SmoothWall had been suggested as a way for me to get NAT in Hyper-V, but now I’ve found I don’t need it after all. 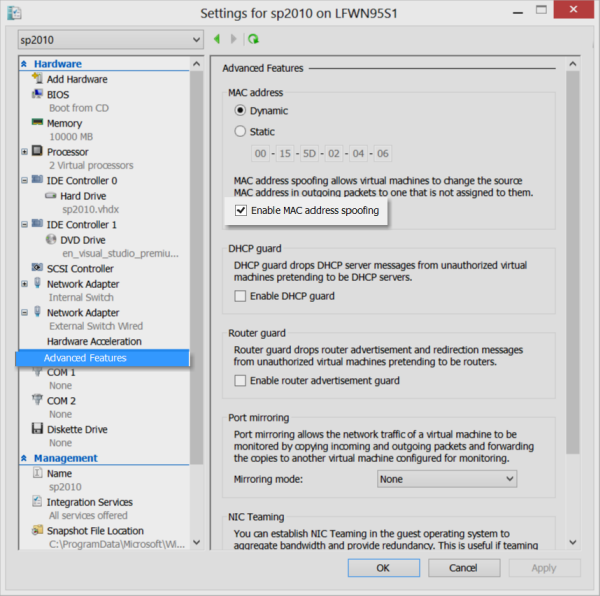 When I have Enable MAC address spoofing checked, I have internet access on my VM. Yay! The trick was finding the checkbox. Before reading Nik’s comment, I had never noticed the tiny little plus sign next to the Network Adapters in my VM settings. Clicking that plus sign expands two new items on the left menu including Advanced Features.

I hope this tip helps others who may be running into issues connecting their Hyper-V virtual machines to networks.