It’s been almost six months since my post predicting every name including SharePoint 2010. Could we be seeing the picture below in 6 more? 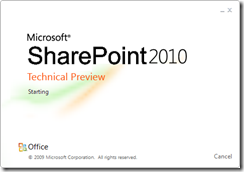 According to the Exchange 2010 Announcement on MSDN PressPass, we should expect a Technical Preview Release of SharePoint 2010 in the Third Quarter of 2009 along with the other Office 2010 products. Release to Manufacturing is officially first half of 2010.

Google News shows lots of press coverage of SharePoint 2010, so don’t take my word for it!

What do you think of the news? Excited, disappointed? Let me know in the comments below or through my contact form.

Update 4/15 10AM Central: Attribution to the original image of Office 2010 Technical Preview goes to Zack Whittaker. I modified his image in Paint.Net to superimpose SharePoint over Office.